The 1893 Triple Crown and the Triumph of the "Cardiff Game"

Oct
05
2022
0
Read so far
In 1893 Wales won their first ever Triple Crown, a triumph that, in the words of JBG Thomas, “set the Welsh believing that rugby football could be their national game.” It was also a vindication of the four three-quarter system devised at Cardiff, proving that it could work on an international level, and after this other teams started to see the benefits and gradually adopt the system that is used today.

In those days there was no Triple Crown trophy but to mark the occasion the players were presented with gold medals engraved with their names. Only two of those medals are known to survive. The Welsh Sports Hall of Fame were able to purchase Frank Hill’s medal from the son of his godson who had taken it with him to Australia. They have kindly put it on display in the Trophy Room at Cardiff Arms Park so that Cardiff supporters and other visitors to the room can admire it. It was recently taken off display for a short while and this gave us the perfect opportunity to reunite the medal with the one presented to Frank Mills, currently on loan to the WRU and used as a fob for a pocket watch.

How long has it been since these medals were last together?

Rhian Israel, photographer at Amgueddfa Cymru - Museum Wales was able to take some fabulous images of the reunited medals, before they were returned. 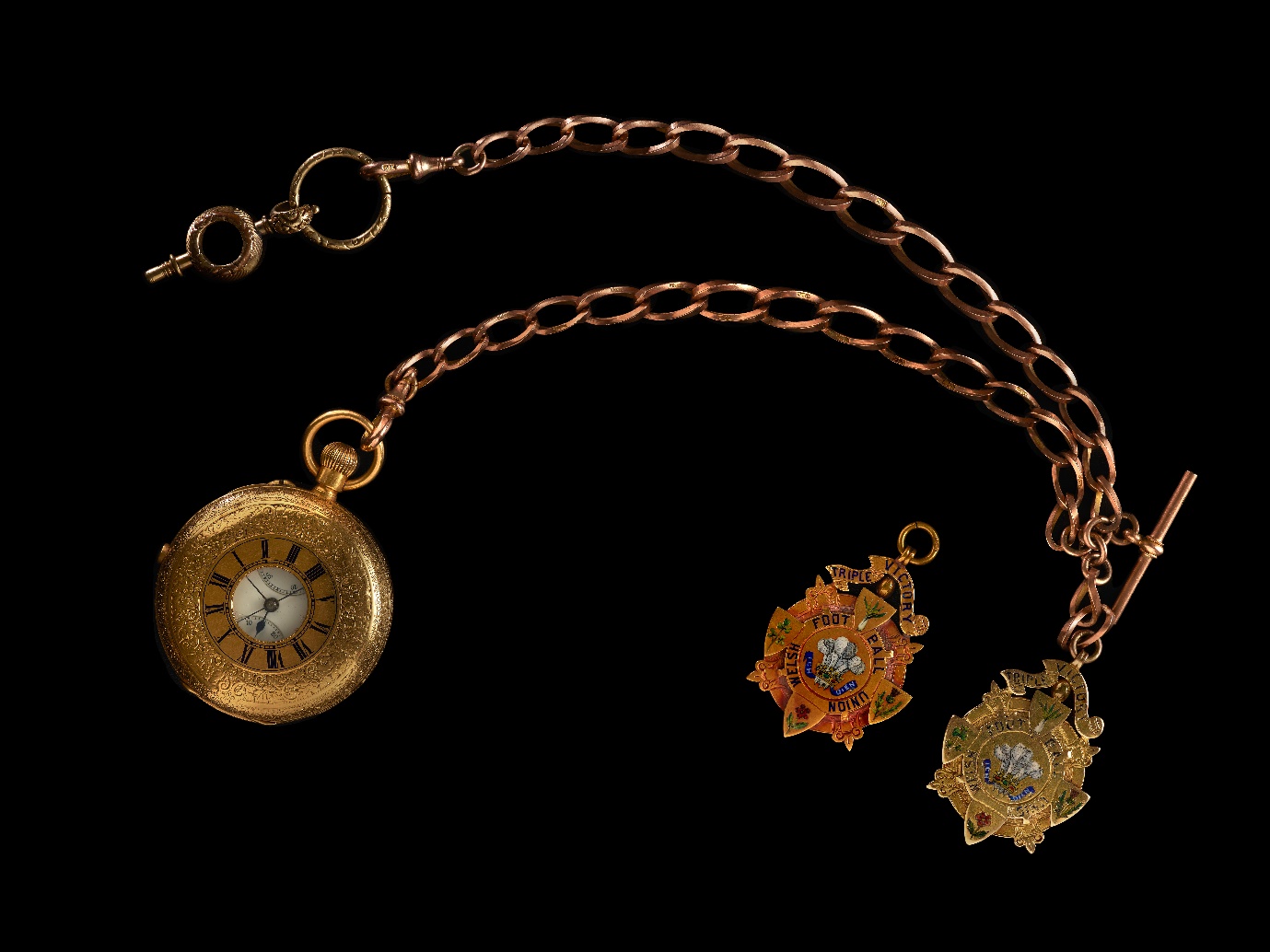 A. F. (Frank) Hill gained 15 Welsh caps and made 153 first team appearances for Cardiff over nine seasons, captaining the team for two of those seasons. He is acknowledged as one of the club’s “great forwards”, playing alongside Hancock in the (almost) unbeatable Cardiff side of 1885-86. This was the team that developed the four three-quarter system and were inducted into the World Rugby Hall of Fame in 2011 to acknowledge their role in creating the modern game.
JBG Thomas described Frank Hill as the Cardiff giant “who later adorned so many club team pictures as a committee man with his immaculate bowler hat.”

Frank Matthew Mills, better known as Fred, was born in Mountain Ash, and gained thirteen Welsh caps at forward. At 6ft tall he must have been quite an intimidating undertaker. He originally played for Swansea before seeing the light and joining Cardiff in 1895.

Here are the 1893 teammates shown standing together in the top left row, Frank Hill in his familiar cross-armed stance. 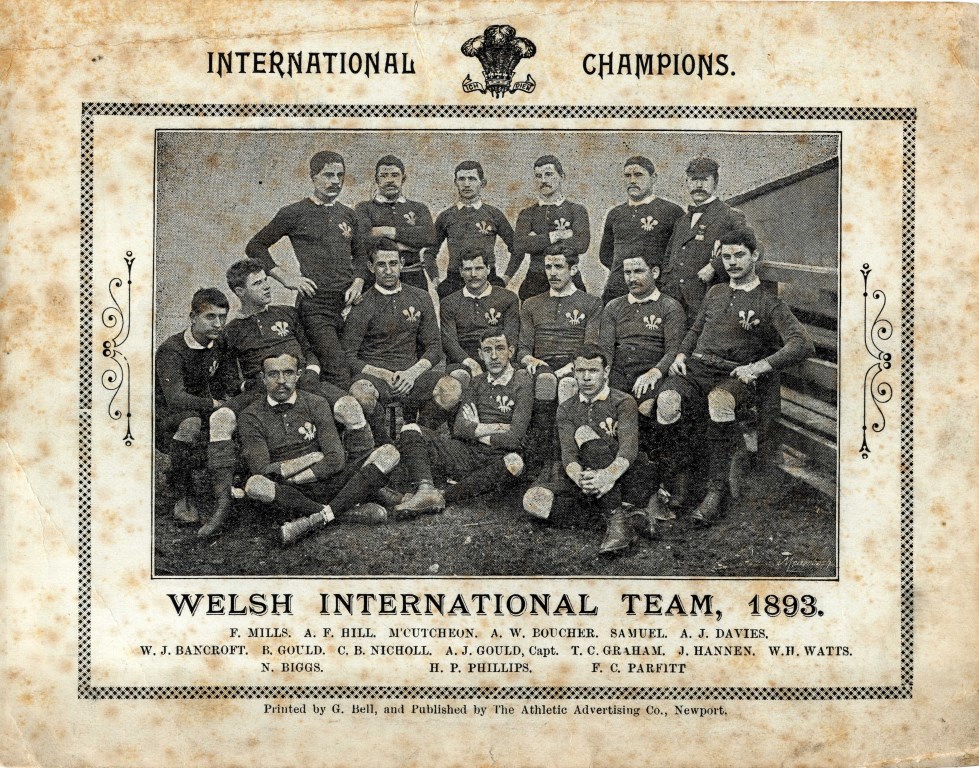 The 1893 Triple Crown was to be an important turning point in the Welsh game, and more broadly for the game of rugby.

After losing to England in 1886, Wales decided to experiment with the four three-quarter system that was proving so successful at Cardiff. Frank Hancock, who helped to create the system at the club, was paired at centre with the great Arthur Gould but the experiment did not go well, and they lost badly to Scotland. The idea was abandoned for the next three seasons before being reintroduced in 1888. Gould had thought long and hard about how to make this system work for Wales and he was to become one of its greatest champions. “Our men don’t try to push their opponents” he explained to reporters “their game is simply to hold the scrum and heel out to the half-backs.”
1893 was to be the season that finally showed what could be done at International level when the game was played in this way.

The first game of the Triple Crown was against England at Cardiff Arms Park in January. The weather in South Wales that January had been particularly severe with ice floes on the Taff and the ground at the Arms Park was “as hard as a brickbat”. Undaunted, staff brought in 500 fire-devils, coal-filled buckets pierced with holes and mounted on bricks. They were placed all over the pitch for 27 hours to help thaw it out. When the London correspondent arrived in Cardiff with the English team he saw “a strange, weird, uncanny sight … like a scene from Dante’s inferno. Dozens of dark ghoul-like figures were threading their way about the fires, heaping on fresh fuel while the falling snow rendered the scene one of the most unique and romantic ever seen on a football field.”

Much to everyone’s astonishment the pitch was declared fit for play and the game was able to go ahead. England had proudly declared that they would “stand and fall” by the traditional three three-quarter game and going in at half time 7-0 up their decision seemed vindicated. They scored again early in the second half, and all seemed lost for Wales. However, the big English forwards could not maintain the pace and the four three-quarter system started to click “teasing runs opening up the field, passing at speed along the line” (Smith & Williams). When the ball was moved quickly in this fashion it really opened up traditional defences, something Cardiff had been demonstrating at club level for some time. Gould scored two tries to secure victory and was quick to praise this new style of play. “Time is beginning to show that the four three-quarter system is the better one”. he declared “English individual excellence far exceeds our own … the whole secret of our success lies in our combination.”

Oddly, Wales initially thought they had drawn the match. The Welsh and English scoring systems differed in 1893 and the Welsh didn’t realise that the International Board had decided to amend the system two days before to bring all games into line. Under the old Welsh scoring system, the game would have been a draw but under the new system they won 12-11.
Wales then took this new open style to Raeburn Place, Edinburgh where they scored three tries thanks to “swift, precision handling amongst the backs”, winning their first ever game on Scottish soil by nine points to nil. Again, Gould was quick to point out the benefits of the four three-quarter system: “Welsh style is a thousand times more interesting for spectators. It is the game of the future.”

Ireland was not convinced. Prior to the final match of the Triple Crown in Stradey Park the Irish captain declared “A pack of good forwards will beat four three-quarters any day”. With Gould nursing a shoulder injury he was very nearly proved right. Luckily there was another Gould on hand to save the day and Arthur’s brother Bert scored the try that won the first Triple Crown. It was also to be the last international match to be played at Stradey.
The Triple Crown success didn’t immediately bring in a golden age of free-flowing rugby. This was to be Wales’ only Triple Crown of the 19th century and three very shaky seasons followed. It was the introduction of Cardiff’s Prince of centre three-quarters, Gwyn Nicholls, initially alongside Arthur Gould, that finally heralded the new era when Triple Crowns became almost commonplace. Nicholls was to be the player who was able to take the ‘game of the future’ the way Gould had long predicted it would go. As JBG stated “The year 1893 and its winter of blizzard and cold laid the foundations for the ‘Golden Era’ that was to come.”

These little gold medals really are the herald of the modern era of rugby when everyone had to learn to play the Cardiff Game. 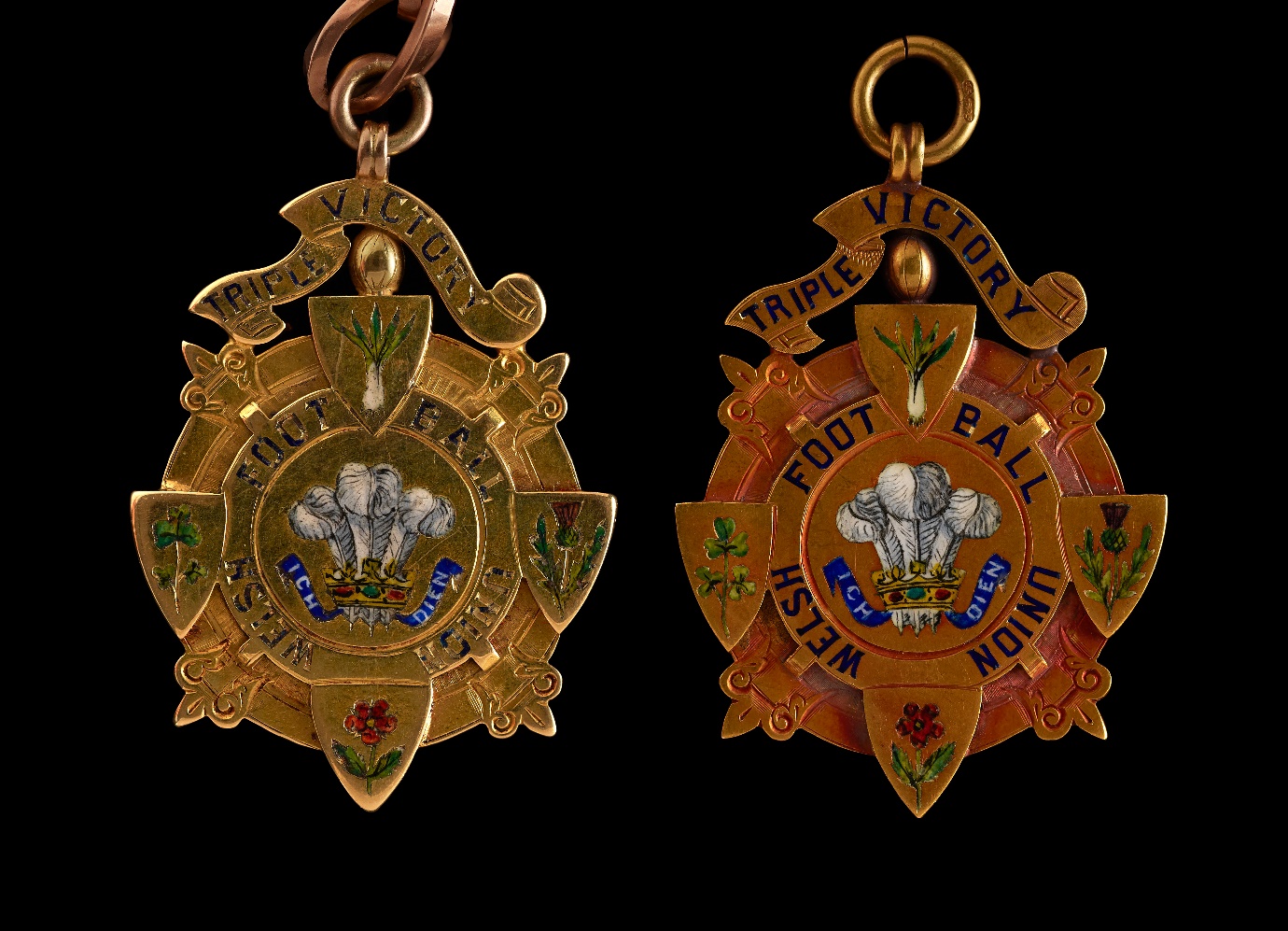