Aug
14
2018
0
Read so far
Objects from the online Cardiff Rugby Museum #3
There is an inscribed gold pocket watch in the Cardiff Rugby Museum collection which belonged to the Cardiff and Wales forward, David “Dai” Westacott. Although it is a striking acknowledgement of what is arguably Cardiff’s finest ever season in 1905-6, it is also a reminder of the darker times which lay ahead for that era’s players and supporters in years to come.
Captained by Percy Bush, the 1905-6 Cardiff team lost only once in thirty-two matches and that single defeat came at the hands of the All Blacks, in front of a record crowd for a club match of over 40,000. Even then it was a desperately close affair, with a conversion being the only difference between the two sides. Despite losing 10-8, Cardiff were the only team (apart from France) to score two tries against New Zealand throughout their tour. 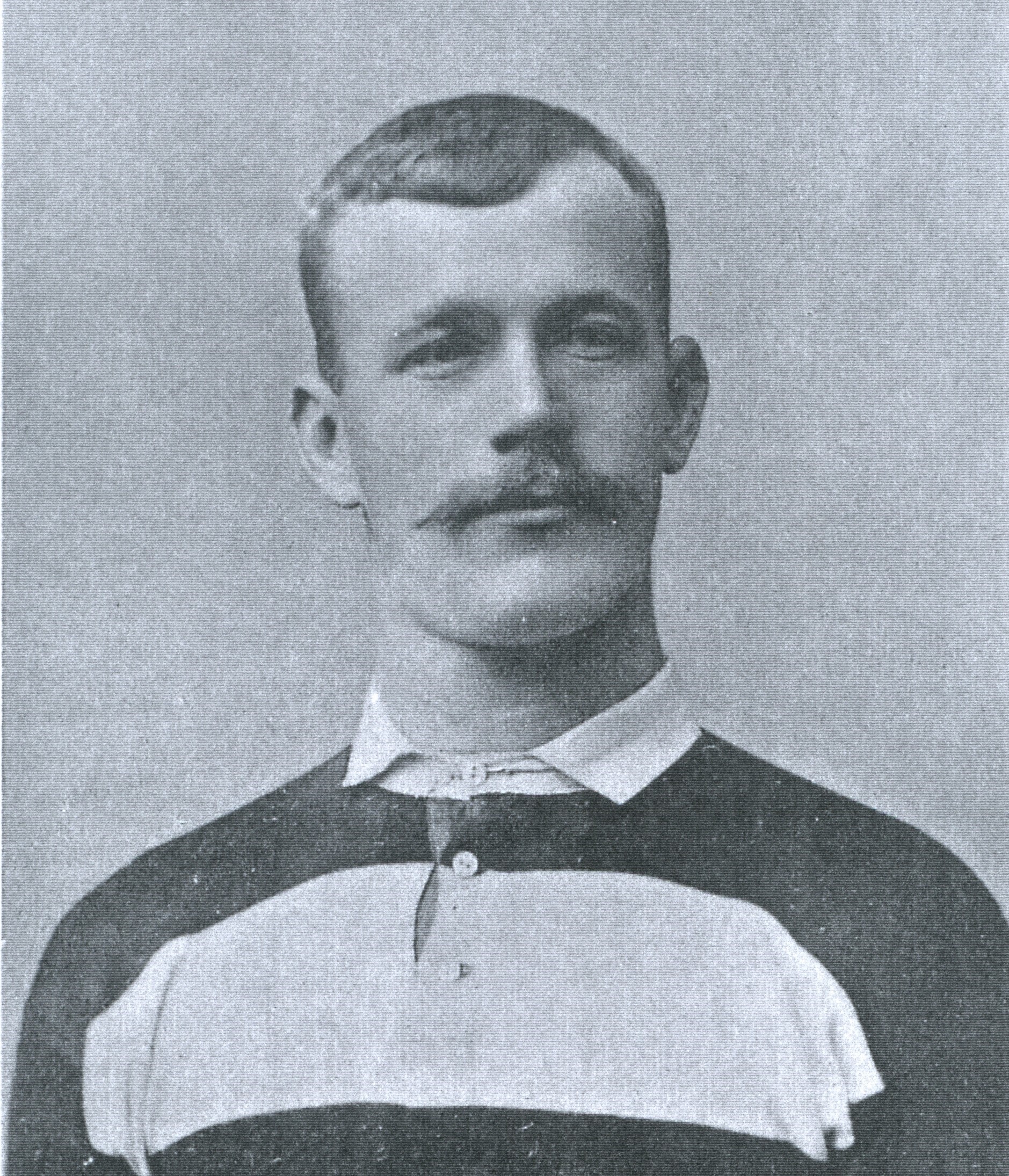 Dai Westacott played regularly for the club during the season but picked up a shoulder injury just before the All Blacks game and so was unavailable. Some believed that his presence that day might have made all the difference. He did, however, play for the Glamorgan County XV which lost 9-0 to the New Zealanders; and towards the end of the season, he was capped in Belfast, when the Welsh XV, ravaged by sea-sickness, were unexpectedly defeated 11-6.
Cardiff drew twice in 1905-6, at Gloucester (3-3) and at Leicester (3-3). However, in both fixtures, crucial scores were controversially disallowed by the referee. The Leicester match followed a mid-week visit to Paris, where a representative French Select XV were beaten 27-5. Newport were defeated four times, as were Swansea, who had been Welsh champions the previous year. Other highlights included Johnny Williams’ five tries against the Barbarians (38-0), while his fellow wing Cecil Biggs repeated this achievement against Llanelli (40-0).
After the season ended, there were calls to commemorate what was described as an “invincible inter-club record”. In response, a group of supporters set up a “testimonial committee” which then commissioned the local jewellers T. W. Long to supply twenty-one 18-carat gold watches to present to the leading players. The money for these was raised by public subscription. 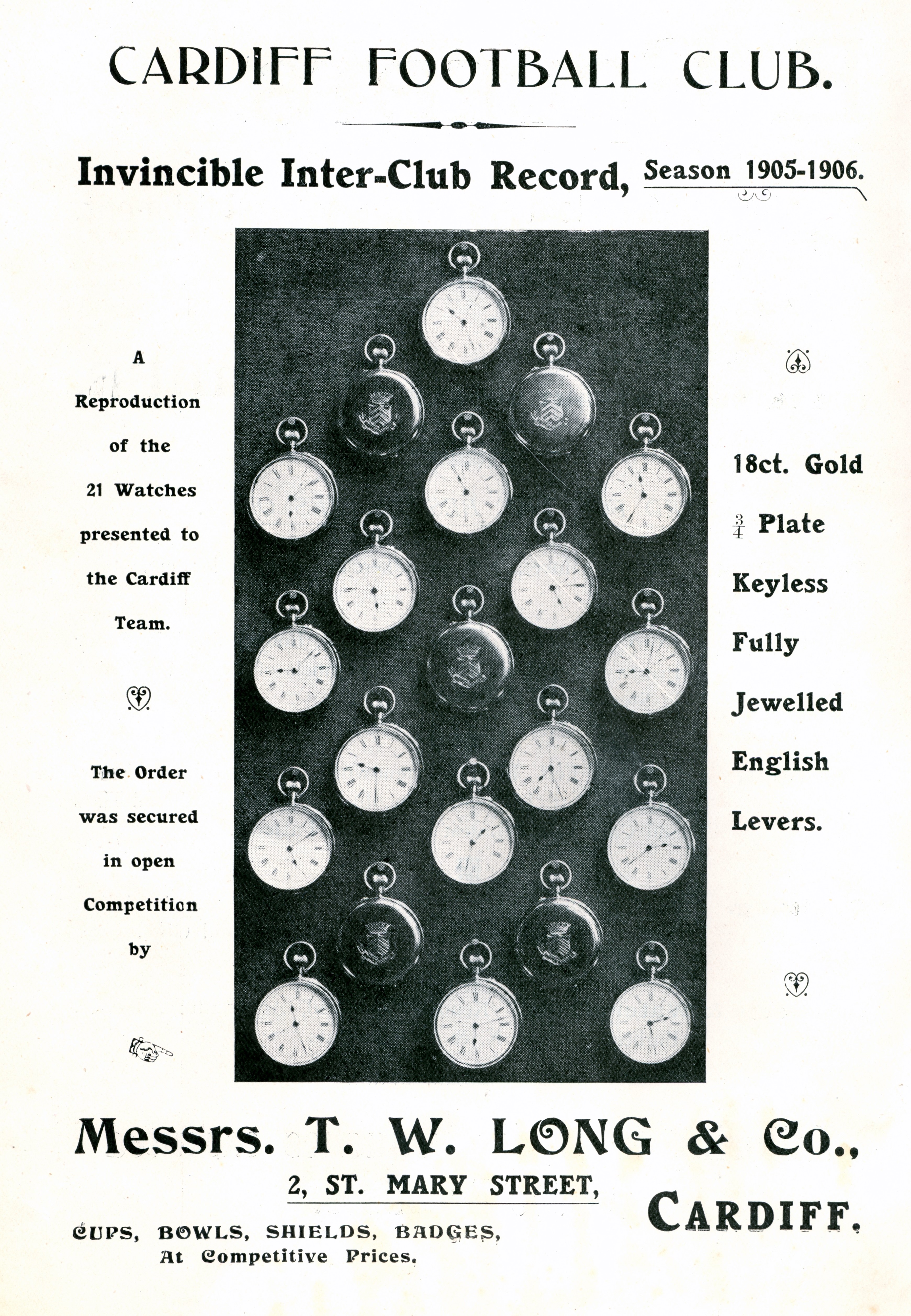 As can be seen on Dai’s watch, the back has an engraving of the arms of the city, surmounted by a crown and with the motto “Villa Cardiff” beneath. 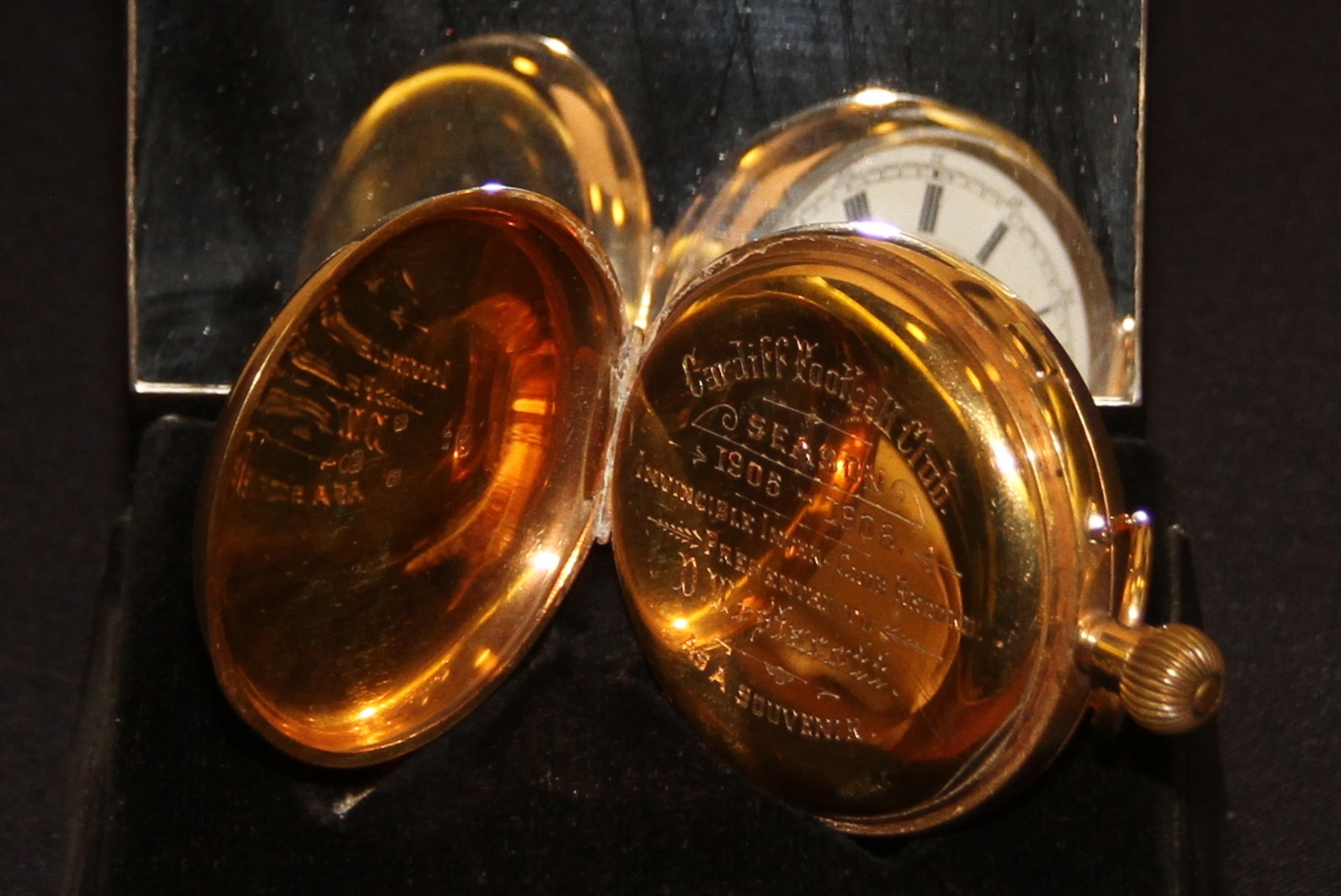 On the inside case is the inscription:
Cardiff Football Club
Season
1905- 1906
Invincible Inter-Club Record
Presented To
D. Westacott
As A Souvenir
The presentation took place in September 1906.  According to the press, “the occasion was one of the happiest in the history of Cardiff football.” The Park Hall was “filled to overflowing”, while the ladies were “accommodated with seats on the balcony”. The Lord Mayor, Alderman Robert Hughes, made the formal presentation.

Despite being a family man with four children, Dai volunteered early in the war, enlisting in the Gloucestershire Regiment in November 1914. After a very short period of training, he went out to France in February 1915 and would have been one of the first volunteers from Cardiff RFC to experience front-line action. Before leaving, Dai left instructions with his wife that, if anything happened to him, his gold pocket watch should go to his son, another David. Tragically, something did happen. Dai had a hard war. He took part in much bitter fighting in 1915 at the Battles of Aubers Ridge and Loos and in 1916 at the Battle of the Somme, where he was badly wounded. He eventually returned to the front again in the summer of 1917 and was serving in the line near Ypres during the Battle of Passchendaele, when he was killed by shellfire on the 28th August. Dai Westacott was one of at least twenty-five former Cardiff players who died in the First World War.
How did Dai’s gold watch come into the keeping of the Cardiff Rugby Museum? Dai’s son David, who also played for Cardiff after the war, subsequently gave the watch to his son Peter, and in 1972 Peter donated it to the club in his grandfather’s memory. This was a particularly generous gift, because it is the only one of these historic and beautiful commemorative watches which can now be seen on public display.