Object Id:
0334
Info:
Apart from newspaper reports, this annual dinner menu card from 1882 is probably the only surviving direct link with the long-forgotten Cardiff Wanderers club which existed for only two seasons from 1881/82 to 1882/83. It was, of course, the second appearance of the name in local rugby, because an earlier   ̶  and equally short-lived   ̶  Cardiff Wanderers merged with Glamorgan FC to form the Cardiff club in September 1876.
During 1881, a group of ship’s pilots in Cardiff decided to set up a rugby club. They initially called themselves “Pilots of the Port” and “Cardiff Pilots” but very soon adopted the name “Cardiff Wanderers”. They were an ambitious organisation and, though they had only a brief existence, they nevertheless had an impact on the game in Wales. The Wanderers arranged fixtures with many of the leading clubs of the day including Newport, Neath, Penarth, Bridgend and Pontypridd. As well as playing against Cardiff Reserves, they also met the Cardiff First XV four times and actually defeated Cardiff on one occasion.
Cardiff Wanderers played at Alexandra Park, a privately run multi-sports ground off Cowbridge Road near St. John’s Church in Canton. The site was developed for housing many years ago and it is remembered today only in the name of “Alexandra Road”.
Several leading players joined the new club. Three-quarter James Bridie, who had played a season for Cardiff and then Newport, was the Wanderers captain in 1882/83. His brother Ron Bridie (Newport), who played at half-back for Wales in Dublin in January 1882, also had a couple of games. James Clare, who was capped by Wales at three-quarter in December 1882, played regularly for the club. He was a Bristol Channel pilot and was one of the founder members of Cardiff Wanderers. Clare’s Welsh cap is also in the Cardiff Rugby Museum (ID 0239).
The last fixture between Cardiff and Cardiff Wanderers proved to be a turning point for both clubs. Though it has been omitted from the 1882/83 club records, there is no doubt that this was an official First XV match. The two teams met at the Arms Park on 3 February 1883 in the first round of the South Wales Challenge Cup. The Wanderers, however, didn’t make a good impression. They were accused of rough play and of constantly disputing the decisions of the referee. During the second half, disgruntled after yet another decision which went against them, they walked off the field, leaving Cardiff the victors by 19 points to 4, under the cup scoring rules.
The Wanderers were severely criticised for their conduct in the game and, deserted by their captain, James Bridie, who left for Yorkshire to join Manningham, they disbanded very soon after.
Over the years, Cardiff’s experience of the cup had included disputes, crowd misconduct and foul play. The Cardiff Wanderers match finally forced the club to consider whether it was worth continuing to participate.  At the end of the season, Cardiff announced they were pulling out permanently. With Cardiff’s withdrawal, the South Wales Challenge Cup undoubtedly lost momentum and it only lasted as a major competition for another four seasons. Perhaps Cardiff Wanderers had something to do with that.
Season:
1881/1882
Category:
Menu
Object Status:
CAC Collection
Acknowledgement:
Info by Gwyn Prescott 11.09.18 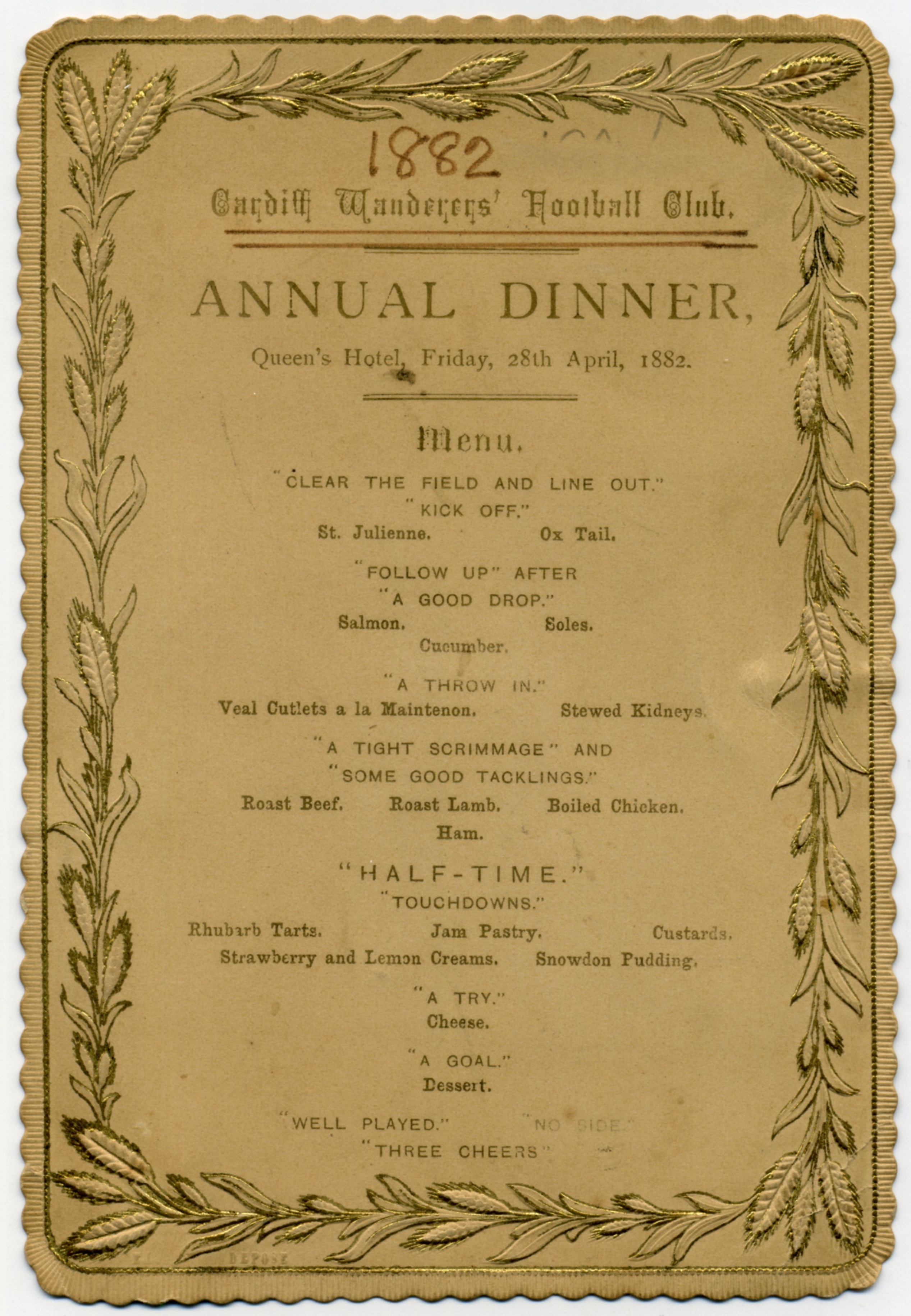