Object Id:
0598
Oldest photograph of Cardiff RFC then known as Cardiff Football Club
Info:
Back Row: W. G. Jones (Umpire), Arthur W. Watts, P. K. Heard, A. J. Evans.
Middle Row: Fleming S. Thomas, B. E. Girling, Raoul Foa (Capt.), T. W. Rees, W. D. Phillips, T. A. Jones.
Front Row: B. Godfrey, E. D. Thomas, Read Macdonald, W. B. Ferrier, Fred Perch, B. B. Mann.
This photograph records the XV which represented Cardiff when they lost to Newport by one goal and two tries in the final of the South Wales Challenge Cup. The match was held at Sophia Gardens on 8th March 1879.
The official playing record for the 1878/79 season was:
Played 20 Won 16 Lost 4
It is the earliest known photograph of the Cardiff club. However, it is also of historic interest for another reason. In 1877/78, after dispensing with its original black jersey with skull and crossbones, Cardiff adopted the colours with which it has been associated ever since. These were inspired by the jersey worn by Thomas William John Rees, who was then a student at Gonville and Caius College Cambridge. He can be seen in the photograph (middle row third from right) wearing a slightly different strip from his team-mates. Evidently, this is the actual Caius College jersey which gave rise to Cardiff’s traditional blue and black colours. Thomas Rees practised as a solicitor in Cardiff before moving to South Africa.
The captain, and club former secretary, in 1878/79 was Raoul Hector Foa (middle row third from left). He went on to enjoy a highly successful banking career, spending much time in Egypt. He was appointed High Sheriff of Kent in 1932.
Another future High Sheriff – but this time of Glamorgan in 1918 – was the coal-exporter John Arthur Jones (middle row first on right), who played for Wales in 1883. He was a forward, as were the other three future internationals in this photograph.
Barry Girling (middle row second from right) was a member of the first ever Welsh XV in 1881 and he captained Cardiff in 1881/82. He died in Algeria in 1905 when working in the coal trade.
Bathurst Mann (front row first on right) was a land surveyor, who emigrated to the USA shortly after playing for Wales in 1881.
Finally, railway manager William David Phillips (middle row second from right) was a remarkable servant to the club and to the wider game before the First World War. Like Girling and Mann, he also took part in the historic match against England in 1881, but he went on to win four more caps. “Bill” Phillips captained Cardiff three times, was Vice-President of the WRU, served on the International Rugby Board, and was an international referee. He was “known as the father of the club” in later years.
Season:
1878/1879
Category:
Photograph
Object Status:
CAC Collection
Acknowledgement:
Info by Gwyn Prescott 08.05.19
Keywords:
CRFC 1st Team Photo 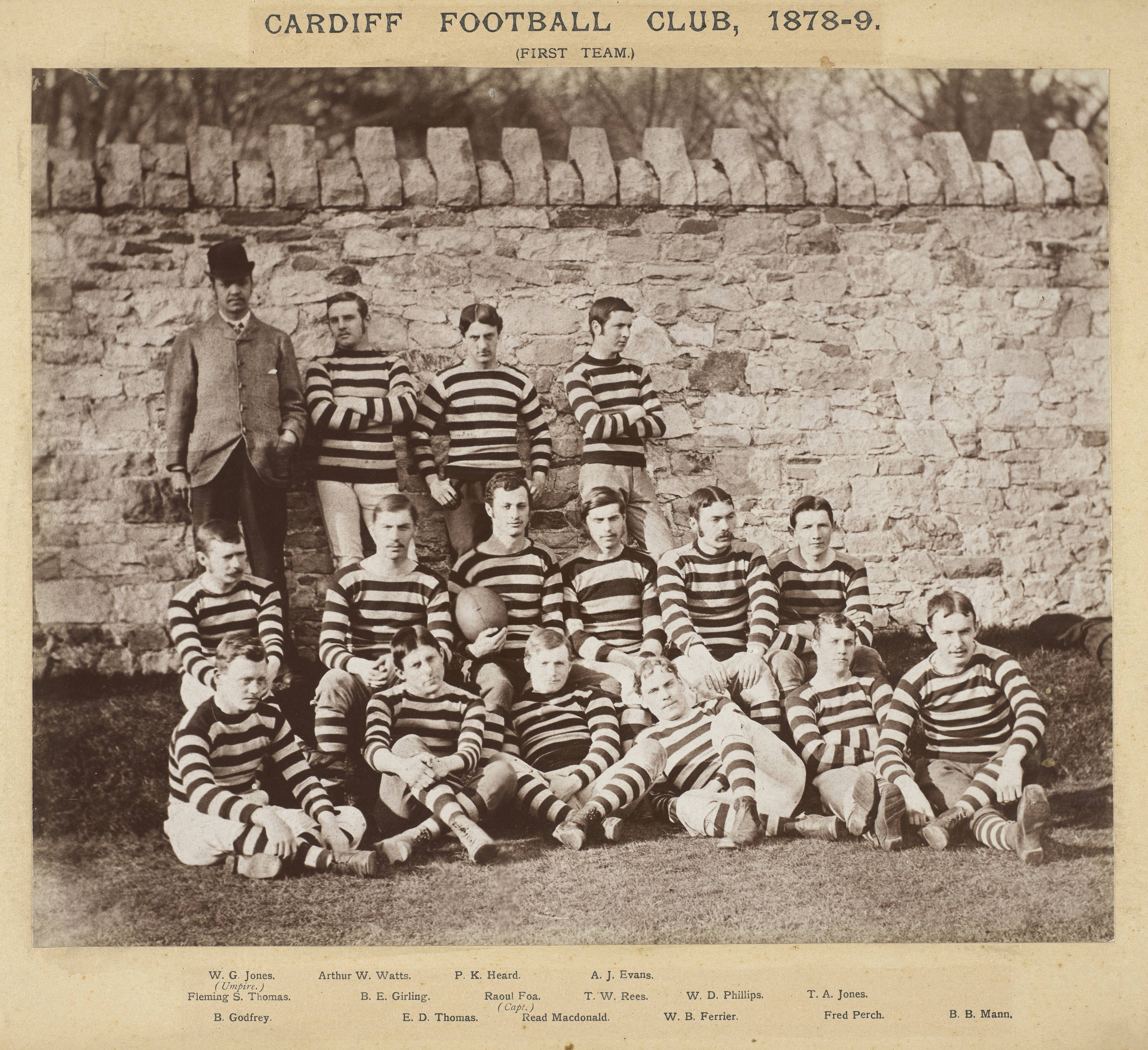 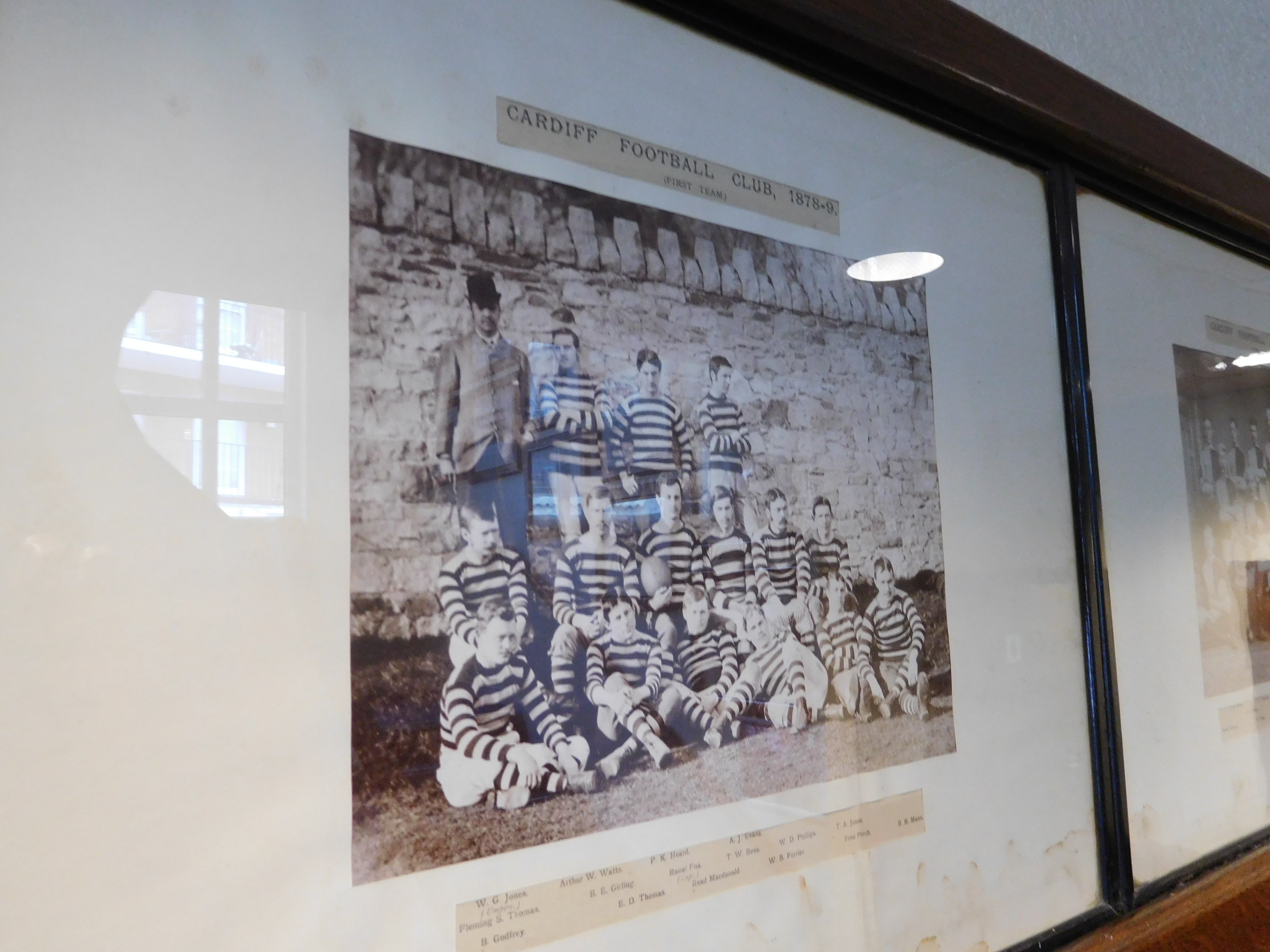