Object Id:
1797
Info:
Cardiff rugby players were amongst the first to volunteer following the outbreak of the First World War in early August 1914. Within a year, it was reported that twenty-three of Cardiff RFC’s active playing members were serving in the armed forces. In December 1914, the Western Mail published these photographs of five Cardiff players who were already serving with the colours. All had played for Cardiff during the last peacetime season, 1913/14.
At least twenty-six former Cardiff RFC players lost their lives during the conflict and sadly two of them are included here.

Clem (John Morris Clement) Lewis was a brilliant outside-half who, remarkably, played for Cardiff, Cambridge University and Wales both before and after the war. He won 11 Welsh caps and made 229 appearances for Cardiff. He was club captain in 1920/21. Serving as a lieutenant in the 16th Battalion (Cardiff City) Welsh Regiment, he was gassed and wounded in the Third Battle of Ypres in 1917. After the war he became a schoolmaster.

Billy (William Joseph) Jenkins joined Cardiff as a forward from Canton RFC. He played 158 games for the club and was captain in 1913/14. He also played four times for Wales. He enlisted in the Royal West Kent Regiment but later served as second lieutenant in the King’s Own Yorkshire Light Infantry. In 1918, he was awarded the Military Cross for conspicuous bravery during in the German Spring Offensive, when he had gone out under heavy fire to rescue a badly wounded comrade. He was later invalided home. Billy was a building contractor and in 1949 he was engaged by the club to erect the Gwyn Nicholls gates in their original location at the Quay Street entrance.

Dan Callan played at forward for Cardiff 47 times. His former clubs were Canton Harlequins and Penylan. In April 1915, he was a last minute replacement drafted into the Welsh XV which lost to the Barbarians at the Arms Park. Only one other member of that team had not played for Wales, and he was capped after the war. Clem Lewis and Billy Jenkins were also in the Welsh side. Dan captained Cardiff Reserves in 1919/20 and then became club trainer for seven years. Of Irish decent, he enlisted in Cardiff as a private in the Royal Munster Fusiliers. After the war, he was employed as a ship repairer and boilermaker.

Gus (Augustus) Lewis was born in Pembrokeshire and worked as a ship’s painter at Cardiff docks. He played for Grangetown RFC before joining Cardiff where he had 32 First XV games as a forward. A little over 18 months after this photograph was taken, Gus was serving as a private with the 7th Battalion Royal West Kent Regiment during the Battle of the Somme when he was severely wounded in the thigh. He died of his wounds in a London hospital on 22 July 1916 and is buried in a Commonwealth War Grave at Cathays Cemetery.

Mog (Morgan) Griffiths was a Cardiff forward in 78 matches.  After a couple of games in 1907/08, he joined Cardiff in 1911. He had previously captained Pontypridd and was a Welsh trialist. Mog was a building contractor. After enlisting in the Army Ordnance Corps, he later transferred to the 22nd Battalion Manchester Regiment. Initially reported wounded and missing during the Third Battle of Ypres, it was later confirmed that he had been killed in action on 4 October 1917.He is commemorated on the Tyne Cot Memorial to the Missing in Belgium alongside three other former Cardiff players.
Season:
1914 - 1919
Category:
Photograph
Object Status:
Private Collection
Acknowledgement:
Info by Gwyn Prescott and Viv Jones
Keywords:
Clem Lewis, First World War 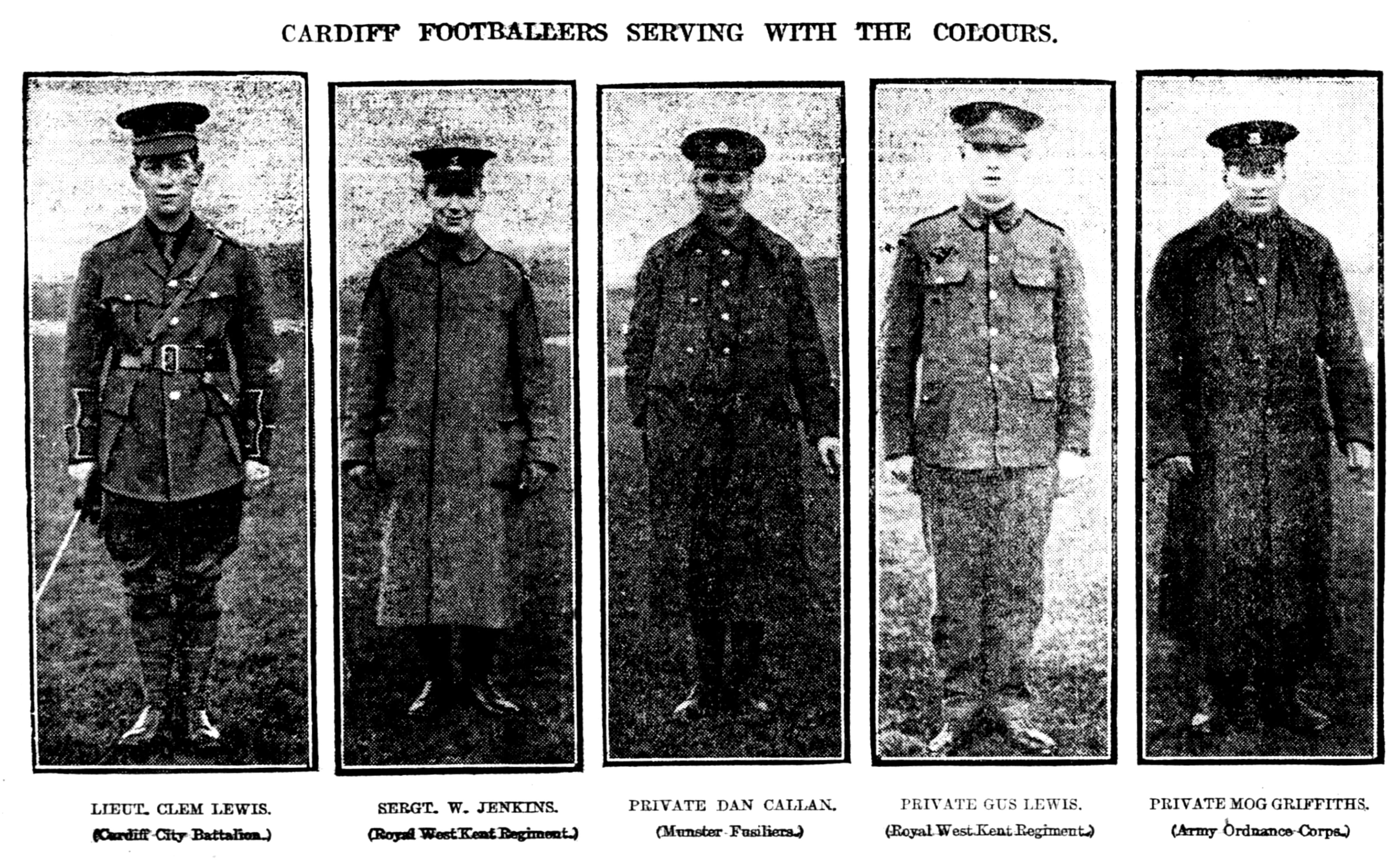