Object Id:
0740
Info:
Tour Manager Mervyn John -
"Friday, 13th May was destined to be a very lucky day for twenty-six members of Cardiff Rugby Football Club. We are the fortunate representatives to embark on what must rank as the most prestigious short tour in the history of the Club. However, it was with some trepidation that we set off for New Zealand after a poor season, with a number of our players unavailable for one reason or another and our captain, Robert Norster, on tour with Wales. It was also the first time that any tour had been arranged with the aid of a major sponsor and not only were we ambassadors for Cardiff Rugby Football Club but also for the internationally famous company, Rizla +.
Two 11-hour flights, a stopover in Los Angeles – we were in Auckland NZ. In our week's acclimatization before the first game, we trained every day for between 1 and 2 hours. The week also saw us relax at the Helensville hot pools, play golf, ten pin bowling, visit and sample the goods at the San Marino Winery, experience the marine life at Kelly's Underwater World, visit our hosts' Club House at Northcote Birkenhead R.F.C., the guests of the Birkenhead R.S.A., travel to Mount Eden and visit the world famous Eden Park and the Auckland Supporters' Club. Our visit to the Auckland Rugby World Club and Restaurant was another interesting evening's entertainment. The building was adorned with rugby memorabilia and one particular room devoted to a library of rugby items and large scrap books with details of all New Zealand and Maori tour itineraries.
Our first game at the Memorial Ground, Birkenhead, saw a very good team performance in controlled rugby with four excellent tries in the first half. Our opponents, a specially selected Centennial Fifteen included in their ranks, All Blacks' Skipper Wayne Shelford together with previous All Blacks Michael Speight and Mark Findlay. A downpour at half time probably restricted our attacking options in the second half and we held out to a very creditable 19 - 10 victory.
After seven days in Auckland, we were ready to move on to Rotorua after a 3-hour coach journey. Our hotel, The Four Canoes, was ideally located adjacent to a horse racing track and rugby playing fields while only a couple of hundred yards from the town centre. We were able to relax in the hot pools situated outside at the hotel and it was the beginning of their winter. One could not forget that we were in the thermal geyser of North Island because of the constant sulphur smell.
With Mark Rowley unavailable to play because of a sprung shoulder in Auckland we entered our second match with only one recognised second row, Mike Parry. The Wasps Invitation Fifteen were selected by the Provincial Bay of Plenty Coach, Gary Jones, included two internationals, Gary Braid and Bruce Smith, and was in affect ‘a shadow Bay of Plenty selection'. The first half saw us completely outplayed by the New Zealand rugby at its best and with a score line of 32 - 4 just after half time. However, the last 30 minutes saw our players take control, attack the Wasps, put the ball behind them and force them into errors with the inevitable scores. The final score at 32 - 28 shows the determination and team spirit of a successful, well coached club squad.
We were now well prepared for the last fixture against The Centurions, Wellington, a team containing internationals Alan Hewson, Murray Mexted, Scott Crichton, Brian McGratten and Hika Reid. A high scoring game saw our superior fitness and teamwork succeed with a 41 – 32 win at the Athletic Park, Wellington before an 8,000 crowd in bright sunshine with 3 tries from the popular wing, Gerald Cordle. The after match reception was held at the Poneke Rugby Club where a very tired Cardiff team were congratulated for their success throughout the two weeks in New Zealand.
Two further days in Wellington for shopping, golf at the Miramar Golf Club and ten pin bowling at Petone and we were flying home via Honolulu. Two days in Hawaii was an ideal end of the tour, relaxation in 90 degrees sunshine."
Tour Party -
A. Donovan (Captain), J. Hadley, G. Roberts, J. Burnell, M. Rowley, M. Parry, T. Crothers, J. Whitefoot, I. Greenslade, O. Golding, S. Crandon, C. Conway, A. Martin, C. Collins, R. Giles, M. Dacey, C. Hutchins, M. Rayer, G. Cordle, A. Phillips, H. Stone, S. Blackmore.
R. Ayres (Trainer), Mervyn John (Manager), Tony Williams (Assistant Manager), R. Beard (Coach).
Season:
1987/1988
Category:
Photograph
Object Status:
CAC Collection
Keywords:
CRFC 1st Team Photo
Related Content:
Programme - NZ Wasps v Cardiff 1988
Programme - Centurions (Wellington) v Cardiff 1988
Pennant - Cardiff RFC Tour of New Zealand 1988 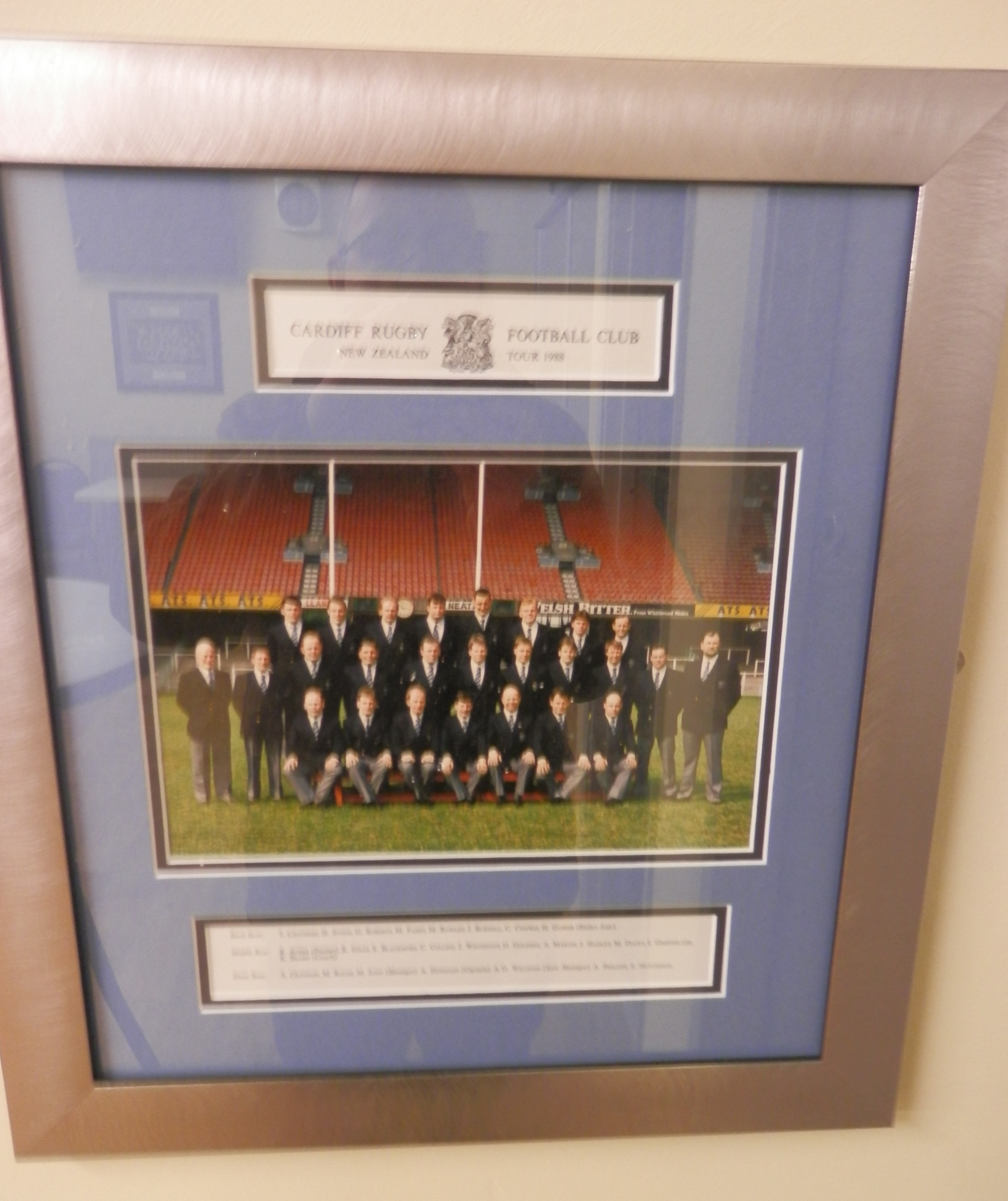