Object Id:
0124
Info:
Extract from the 1906/07 season review -
The outstanding event of the season was the visit of the South African touring team. The Springboks “; captained by Paul Roos, who played Cardiff on New Year’s Day 1907, They had conquered all opposition from club, county and international teams except Scotland, who had defeated them by 6 points to nil, and the Cardiff match was the last of their tour in Britain. Unfortunately perhaps, for these most popular tourists, the match was played in rain on an already wet and muddy ground, conditions more likely to favour Cardiff, who did however overcome the elements and achieved a most magnificent victory by no less than 17 points to nil. The great Arthur Gould of Newport one of the greatest three quarters in Welsh history said after the match : “ On today’s play. Cardiff would have beaten any team in the world In the atrocious conditions Cardiff rose magnificently to the occasion and played brilliantly at times, all four tries coming from the three quarters Gwyn Nicholls, R. A. Gibbs, J. L. Williams and R. T. Gabe; our full-back Bert Winfield scored the remaining points with a penalty goal and one conversion. Against a heavy South African pack. Cardiff decided to play seven forwards against eight, and used Percy Bush as extra halfback or rover. As befitted the times, the Press coverage was prolific, the “Western Mail devoted six full columns of small print on the match, and its writer ‘ Forward “, said ‘ Wales has redeemed her reputation “. Amongst other eulogies, the secretary of the club, Charles S. Arthur, wrote ‘ No Cardiff team ever played better or achieved so great renown, and the best man on the field, as had been so often before was Gwyn Nicholls. He never played a better game in his life nor scored a better try than the one which opened Cardiff’s score. The South Africans took their defeat in a most sportsmanlike manner, and confirmed the opinion which had been formed that they were a great team of gentlemen and athletes. No visiting team to South Wales was ever thought so highly of as the South Africans, many of whom were carried off the field on various grounds in Wales, shoulder high.” After the match the teams dined at the Queens Hotel, and the visiting captain Paul Roos, and the manager Mr. Carden, spoke with magnanimity about Cardiff’s play, the former stressing the greatness of Cardiff’s veteran Gwyn Nicholls. South Africa’s fine sportsmen left to take the 7 p.m. train for London, and at the Great Western Railway Station they were given a grand send off by a large crowd who sang to them—Auld Lang Syne. The gate on this atrocious day totalled 30,000 and unashamedly I quote the names of the teams, for posterity :— SOUTH AFRICA: Full back, A. F. Marsburg; three-quarter backs, J. A. Loubser, H. de Villiers, J. G. Hirsch and A. Stegman; half-backs, D. C. Jackson and F. J. Dobbin; forwards, Paul Roos (captain), H. J. Daneel, J. W. E. Raaff, D. J. Brink, W. A. Millar, D. Morkel, P. A. le Roux and W. A. G. Burger. CARDIFF: Full-back, H. B. Winfield; three-quarter backs, C. F. Biggs, R. T. Gabe, E. Gwyn Nicholls and J. L. Williams; half-backs. R. David and R. A. Gibbs; extra halfback (rover), P. F. Bush (captain); forwards, George Northmore, J. Brown, W. Neill, Jim Casey, Fred Smith, A. “Bobby” Brice and Jack Powell. Referee : Mr. Gil Evans. Touch judges : C. H. Carden (South Africa) and J. Davies (Cardiff)
Season:
1906/1907
Category:
Postcard
Object Status:
CAC Collection
Keywords:
South Africa 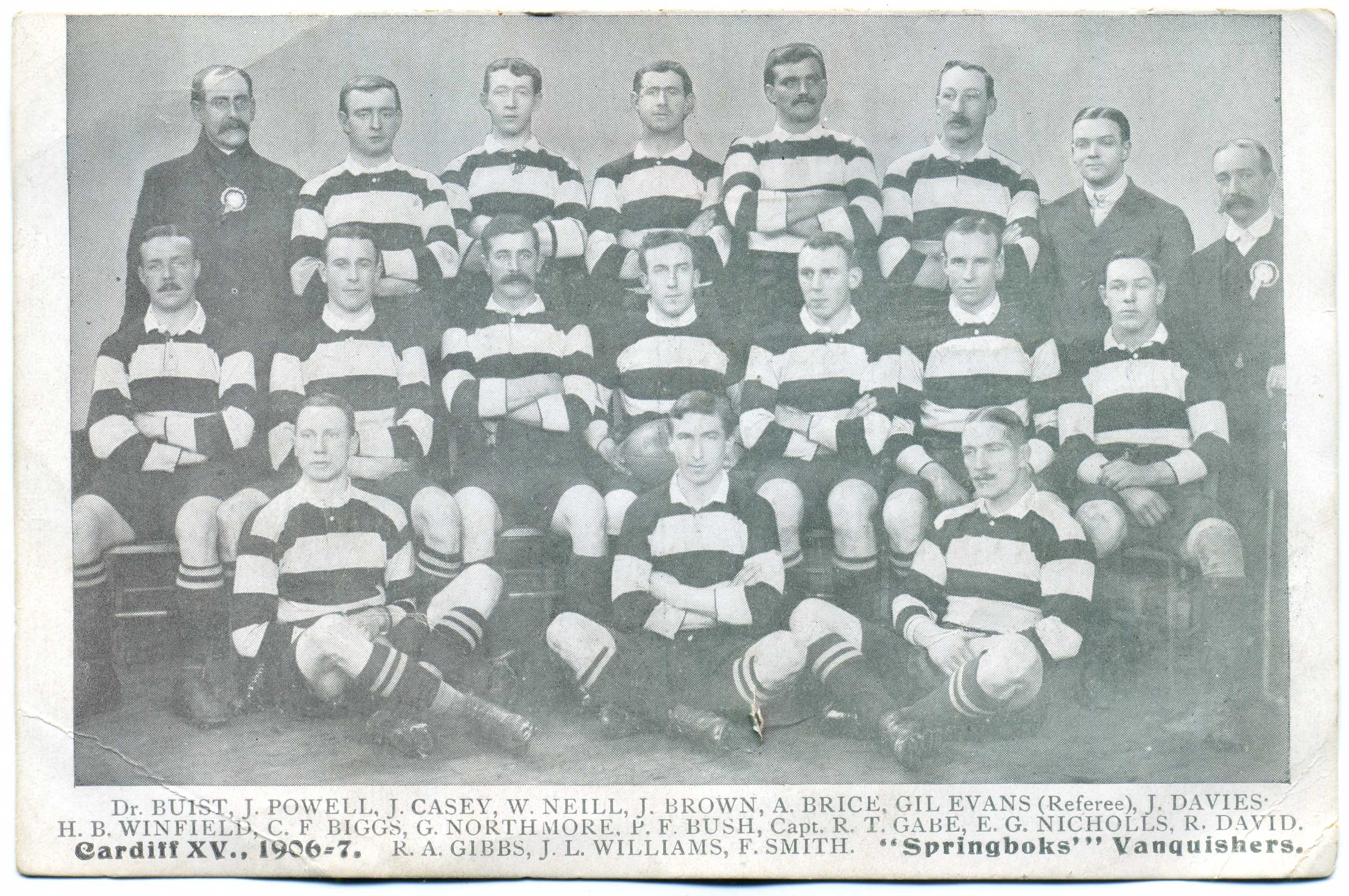 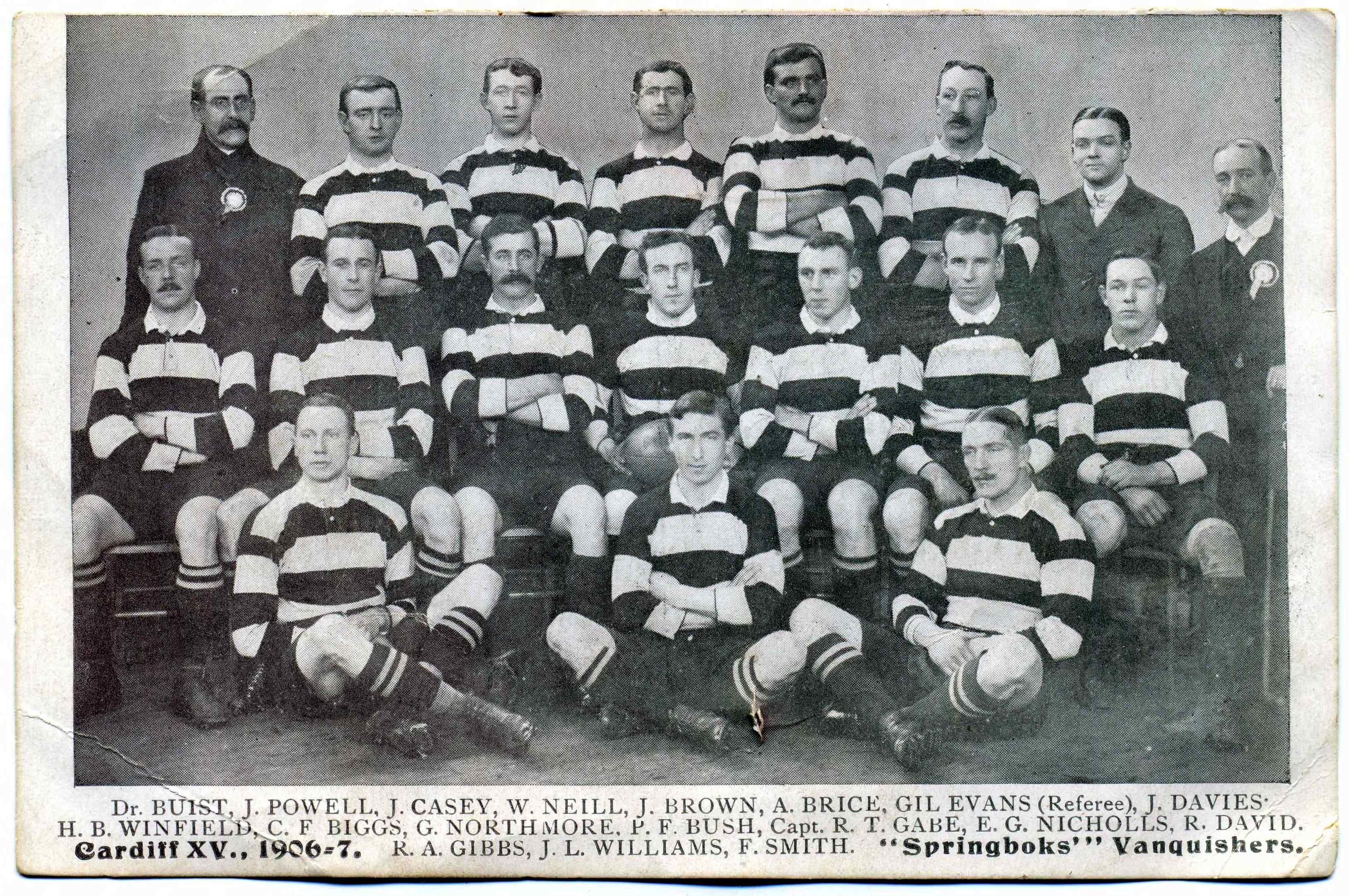 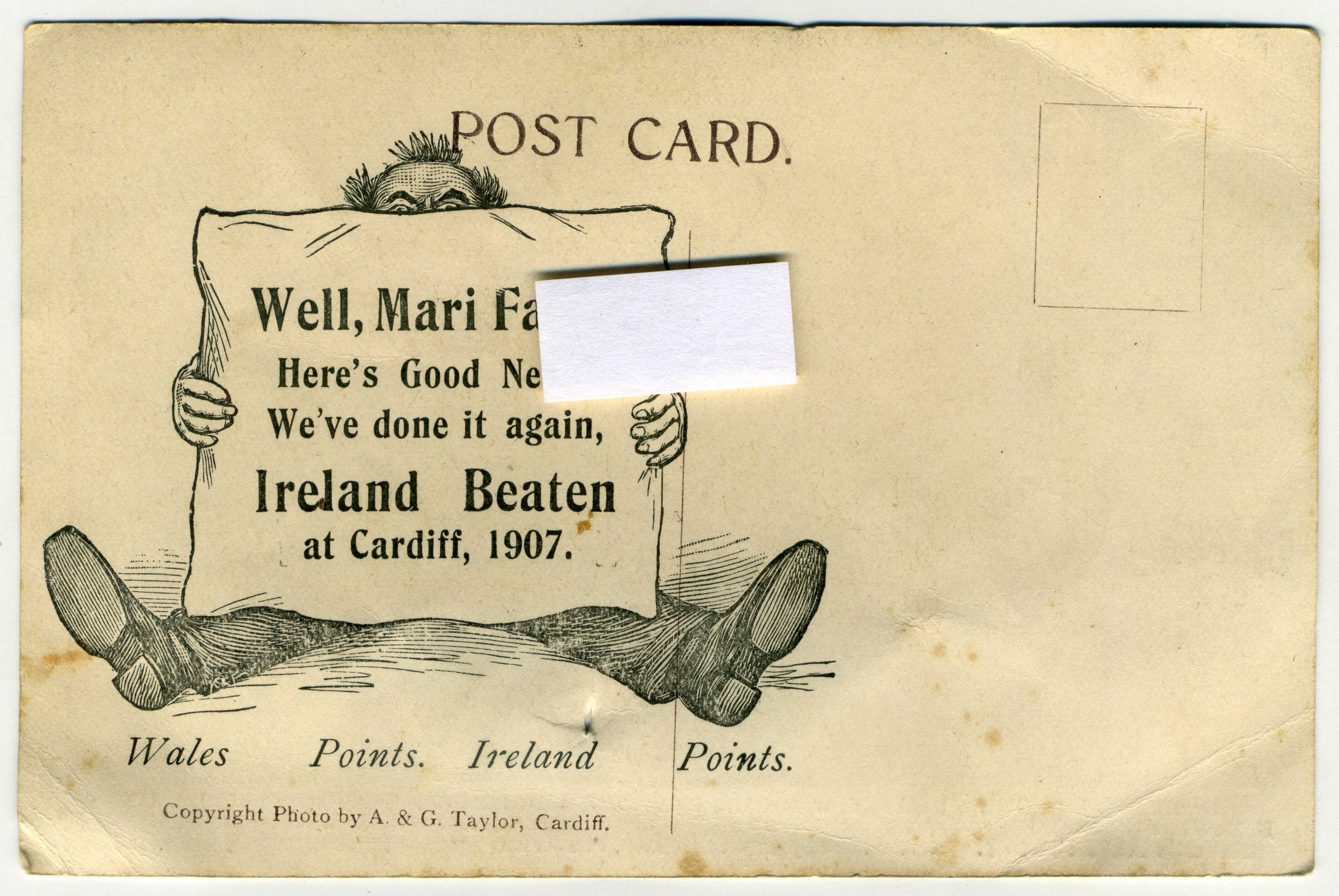