Object Id:
2279
Info:
At the Arms Park on Saturday 11th May 2019, Rumney defeated Rhiwbina 20-17 in the final of the Mallett Cup. The 2018/19 season marked the hundred and twenty fifth anniversary of this competition which was first organised in 1894. Apart from the war years, it has been held every season since and it is therefore the oldest still being contested in Wales. This year's final was the hundred and fourteenth. The venue for almost all of these has been the Arms Park.
Despite recent changes and reorganisation in local rugby, the Mallett Cup is still going strong. Before this season, it was the premier competition of the Cardiff and District Rugby Union. Cardiff RFC actively supported the District Union on its formation in 1892 and many club players and internationals subsequently came through its ranks.
However, from 2018/19, the Mallett has become the senior cup for the newly constituted East District Rugby Union (WRU District B) into which Cardiff and District has merged.
The first final was played at the Harlequins Ground on 14th April 1894 between Cardiff Reserves and Canton. It was a closely fought contest which Cardiff were a little fortunate to win by 8 points to nil. They were helped by the presence of a young Gwyn Nicholls in the centre. He of course captained Wales to victory over New Zealand in 1905, but winning his Mallett Cup medal that afternoon was the first of his many honours in the game. Canton were not without stars of the future either. Playing at fullback for them was Viv Huzzey who later won five caps (as a Cardiff player) on the wing for Wales before turning professional.
So Cardiff RFC became the first of the thirty-six clubs who have won the trophy over the hundred and twenty-five years of its existence. Besides Cardiff, the other thirty-five Mallett Cup winning clubs include: Caerau Ely, Canton, Cardiff Metropolitan University, CIAC, Dinas Powys, Fairwater, Glamorgan Wanderers, Llanishen, Llanrumney, Pentyrch, Rumney, St. Albans, St. Josephs, St. Peters, and Whitchurch; as well as twenty clubs which no longer exist: Canton Wanderers, Cardiff Barbarians, Cardiff Crusaders, Cardiff Dockers, Cardiff Gas, Cardiff Northern, Cardiff Romilly, Currans, Grange Baptists, Grange Stars, Grangetown, Guest Keen, Mackintosh, Melingriffith, Old Howardians, Old Sandonians, Roath, Spillers, St. Davids, and St. Pauls.
Cardiff RFC did not defend the Mallett Cup the following season, probably because for the next two years, the competition was organised as a league rather than a knock-out. The club never entered a team in the Mallett Cup again.
Gwyn Prescott 06.06.19
Season:
2018/2019
Category:
Programme
Object Status:
CAC Collection
Keywords:
Schools/Youth
Document: 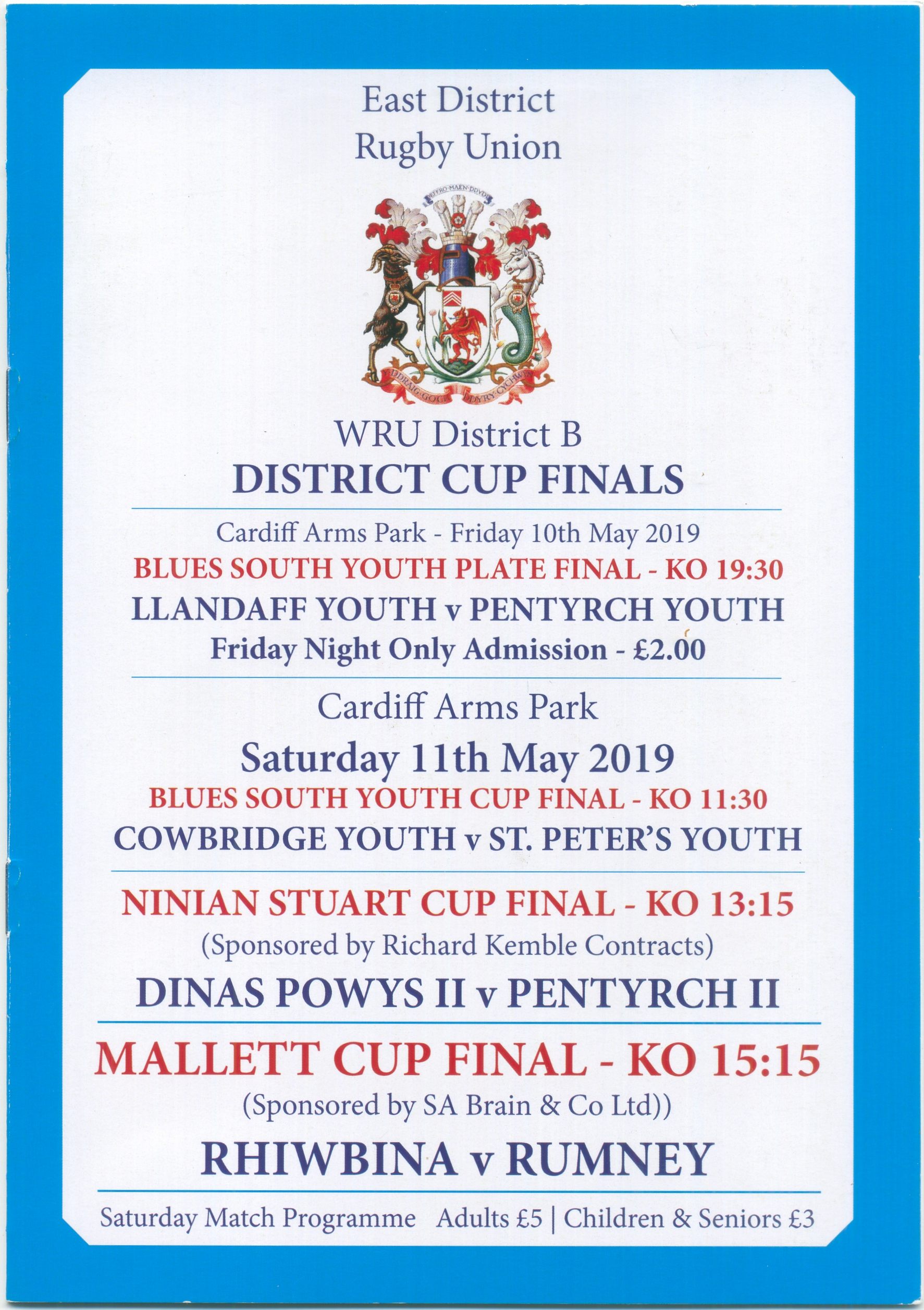