Danny Davies' splendid account of Cardiff Rugby Club's first journey by air -
"We had agreed to fly to Nantes to play their club on Armistice Day, 11th November, a Monday. At home on the previous Saturday we had won a good match over Newport on the Park, and after tea in the cricket pavilion I was checking up on final arrangements with the team and actually issuing the passports for travelling next day from Pengam Airport when I received a phone call from Monsieur Picherit from Nantes, with the distressing news of gale force weather in France and the inability of our plane to get airborne. Imagine the disappointment to all of us !! Sadly, a number of the boys drank a few extra " jars" before final dispersal home, a few of them to local hotels. At 7 a.m. next morning I was awakened by a phone call from Paris to where Monsieur Picherit had travelled overnight." The weather has changed and the plane can fly, please get your party to Pengam Airport by 1 p.m. to meet the charter plane (a former German war plane J.U.52) to bring you to Nantes". (Via Bristol Airport to clear customs.) I rounded up, my previously made 'contacts', and got the party to Pengam in time. But there we waited, with our well wishers until gone two p.m. when we spotted the aircraft coming through dull cloud towards us, only to see it turning west towards St. Athan, from where through a contact made by Flying Officer Bleddyn Williams, it was diverted back to Pengam. The pilot with two officers explained that they had been delayed and that it was now getting too late to fly to Nantes that evening—the landing ground had been damaged, "too dangerous to land, tarmac war damaged ".
We got to Bristol Airport only to be told that the customs official had gone home, some five miles away, there must be further delay, we could not fly that Sunday night. Accommodation was found in Bristol for the team and the French air crew, and we were able to get away at 8 a.m. on Monday morning. Fair weather now prevailed, we had a smooth trip, crossing over Mulberry Harbour, the Normandy Beach-head, and Caen where so much bitter fighting had taken place during the war after " D. Day" landings. Nearing Nantes we were escorted by a French light plane and landed safely, very much to the relief of the French officials, the president Marcel Pedron and hon. secretary Henri Picherit in particular. We were informed that every ticket for our match had been sold. Brice Jenkins our hon, secretary and I, laid a wreath on the local war memorial, Bleddyn Williams and our captain Jack Matthews were both in their respective uniforms of the R.A.F. and R.A.M.C. respectively. Letters of greeting from Cardiff's chairman and our Lord Mayor were duly handed over to their counterparts of Nantes. The match was won by 22 points to five and the remainder of the time was enjoyed in the splendid hospitality of the Nantes club officials. Then a safe journey home to Cardiff, where before landing, the pilot (all had now been forgiven) flew the plane around the city and over the Cardiff Arms Park. Such was the Cardiff Rugby Club's first journey by air."
From D.E.Davies' 1946/47 Season Report
Season:
1946/1947
Category:
Programme
Object Status:
Private Collection
Acknowledgement:
Image courtesy of Hervé Padioleau of Stade Nantais Rugby Club.
Keywords:
French Club, Programme, Stade Nantais
Related Content:
Programme - Stade Nantais v Cardiff 1946
Invitation - Stade Nantais v Cardiff Dinner 1946 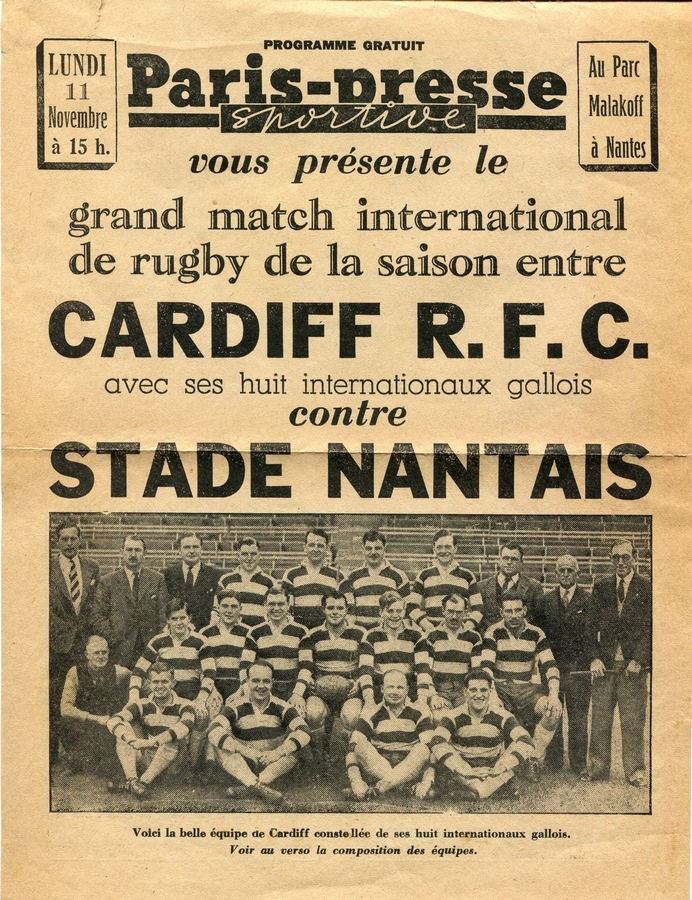