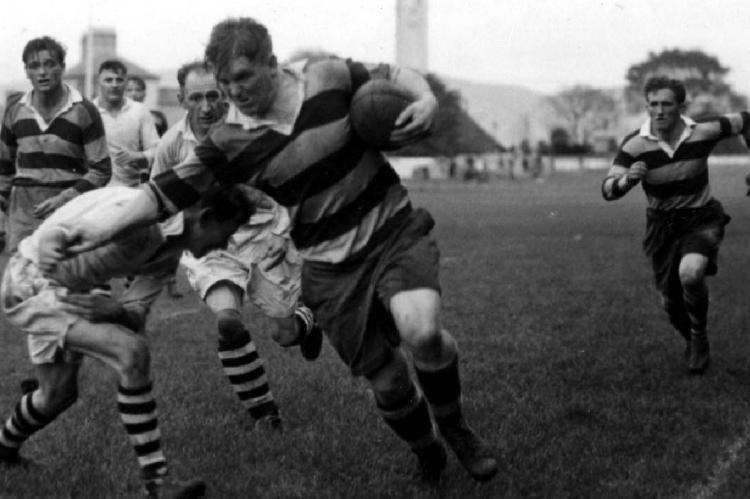 There have been many greatest XV teams on social media in current weeks following the ongoing coronavirus lockdown. CF10 Trust and Cardiff Blues have also got in on the act with readers being able to vote for their selections by those names being put forward. It has certainly been entertaining seeing people’s thoughts, and that’s why I was delighted when Cardiff Rugby Museum asked me to put together a greatest XV, but this time look at a greatest team of uncapped players who have graced the field playing rugby for Cardiff.
In terms of my selections, then my choices are those players who never received full international honours either during their playing career with Cardiff or elsewhere. Secondly, current players who are still playing and in the peaks of their careers and even may win international caps in the future such as Willis Halaholo, Will Boyde, Ollie Robinson etc., for example, I have also excluded from my selections.
Bearing that in mind, here are my candidates for each position and then a short biography on each of my choices. I hope you enjoy reading.

Some of the names considered include John Davies, Glyn Davies, Chris Webber, Chris John and Dan Fish but my choice to wear the number 15 shirt is Paul Rees.

“Pablo”, as is his nickname, was an outstanding attacking fullback who played 157 games for Cardiff between 1975 and 1985 before leaving Cardiff for Pontypool during the Mark Ring and David Bishop era and was a star there as well. Played for Wales B but never gained full honours.

Some strong contenders. Players such as Gerald Cordle Derek Preece, Steve Hughes, Frank Wilson, Liam Botham and Mike Carrington all excellent players but my choices for the winger positions is Chris Camilleri and PL Jones.
Chris Camilleri was a star for Cardiff in the 1970's. Camilleri played for five years for Cardiff scoring 74 tries in 124 appearances before he went north to play Rugby League for Barrow, before moving to Widnes and Cardiff City Blue Dragons. Camilleri was a star in rugby league, representing Great Britain and Wales.
PL Jones played 12 years for Cardiff RFC scoring 122 tries in 233 appearances. A player loved on the terraces at Cardiff Arms Park. Jones was a wrecking machine when in full flight. Very unlucky never to play for Wales.

Some names in the centre who were uncapped include John Regan, Tony Williams, Gwyn Martin, Neil Hutchings, Steve Crandon, Chris Webber, Dai Barry, Geraint John, Matt Allen, Dafydd Hewitt and Marc Stcherbina. But my choices at outside and inside centres are Colin Laity and Mike Murphy.

Colin Laity was a barnstorming centre, who used to give his forwards a target when he carried the ball forward and had a good turn of pace. Laity starred for a very good Neath side before coming to Cardiff for five years, playing 68 times and scoring 26 tries.
Mike Murphy was an excellent centre foil for players such as Alex Finlayson and Pat Daniels amongst others and was an outstanding player. He played for ten years for Cardiff between 1975 and 1985 playing 118 times and scoring 34 tries.

Tony Williams, Geraint John and Dai Barry as they were at centre very close to selection. As was Danny Wilson before he moved onto Rugby League. However, the pick at fly-half is Keith James.

Keith James played for Cardiff for three years between 1972 to 1975 making 98 appearances. After leaving Cardiff, he went onto play for Newport and Pontypool amongst others. A very skilful player who played for Wales at different age levels and Wales B.

Andy Booth was so unlucky not to be capped by Wales, he was an excellent player with exceptional service to his outside backs and a good kicking game. He played 117 times for Cardiff scoring 42 tries.

Some problematic choices for these positions with so many options. Players such as Colin Howe, Don Llewellyn, Gerry Wallace, Bob Newman, Kevin Matthews, John Dixon, Phil Sedgemore, Gary Powell, Paul Edwards and John Rawlins all came into the reckoning. Still, my choices for the 1 and 3 shirts are Stan Bowes and Roger Beard .

Stan Bowes played for Cardiff between 1945 and 1956 and starred in the famous win against New Zealand in 1953. Bowes was renowned as being a tough forward and a fine rugby player. (Picture at top)


Roger Beard played for Cardiff between 1965 and 1975 making 165 appearances. A very technical scrummager who never let Cardiff down. A great servant to the club going on to coach Cardiff after he retired from playing.

Ian Greenslade, Jose Souto, Mike Regan and Lawrence O'Brien were all excellent players during their careers with Cardiff, but my choice at hooker is Gary Davies.

Gary Davies played 13 seasons for Cardiff in the 1960s and 1970s and skippered the side several times. He played 281 times for Cardiff. An outstanding player.

Peter Souto played for Cardiff between 1979 and 1981. He was on the verge of a Welsh cap but moved to rugby league playing for Fulham, St Helens and Widnes over a seven-year period. An outstanding athlete who could have played for Wales in union for many years.
Paul Tito came to Cardiff Blues in 2007 from the Hurricanes in Super Rugby. He was an instant success and a player who gave absolutely everything he had for the team. He captained Cardiff Blues and was captain the day that Cardiff Blues won the EDF Trophy at Twickenham in the mauling of Gloucester when Tito was named as the man of the match. He played for NZ Maoris, but never earned full international honours for New Zealand.

Robert Lakin played in the 1970s, 80s and 1990s for Cardiff playing 325 times for the club, scoring 64 tries in a great career. A blindside flanker who was a sturdy and durable player, strong in defence, a good ball carrier and a fine lineout option. Lakin won a Wales B Cap and represented the Barbarians but never won that elusive cap. A fantastic servant to Cardiff.


Carl Smith could play either at eight or at lock and was a fearsome sight on a rugby field. A fantastic player and a great athlete. He spent ten years with Cardiff playing 235 times, and also during his career played for Swansea and Pontypridd. A great player.


Mike Budd was simply a fantastic open side flanker. Brave at the breakdown, a highly skilled player with a great turn of pace. Budd was a fan favourite at Bridgend before joining Cardiff and spent three years with Cardiff playing 51 times and scoring an impressive 24
tries. So very unlucky never to play for Wales.

So there you have my greatest uncapped Cardiff side. What do you think, agree/disagree let Cardiff Rugby Museum know! We would love to hear your views.

Great article, can’t argue with those selections. It makes you realise given the quality of players, how elusive the cap once was. Would love to see a ‘where are they now’ section / player bios not just for these players mentioned, but across the club in general.

Loved PLJ. would have liked

Loved PLJ. would have liked to Jose play with his brother and Gary Samuel at No9

As a young lad, in the early

As a young lad, in the early seventies, I used to go to all CRFC games with my father and the player I always remember and used to get excited about was P L Jones. A great player and the crowd would go bananas every time he got the ball. Great memories.

I worked with Stan Bowes and

I worked with Stan Bowes and played rugby with him once when he was 57 for the Tom Baxter-Wright XV against Llandovery School
a great man.

I loved PL Jones and, as you

I loved PL Jones and, as you note, so did all on the terraces. Would love to know what became of him. Any chance of an interview?

Totally agree I was there

Totally agree I was there with my dad - god bless him - players would bounce off PLJ on his rampaging runs; but I’m sat in my kitchen telling my kids about that era but what about Carl Smith? Especially in black history month he was superb always wore a head band true pioneer top player - where is he now??

Apologies for lateness, but I

Apologies for lateness, but I'd like to mention my late friend Maurice Braithwaite. After I praised RH Williams for dominating his French 2nd row opponents, he said, 'He didn't look so good from the front row of the stand when you'd outplayed him in the final trial'. Your fine piece brought back many happy memories.